Eclectic, compelling, and in places uneven, The Best Small Fictions 2016 presents a wide-ranging take on flash fiction, taking the reader from the woods of Michigan to Minnesota’s I-35 on a journey through the finest short fictions of the past year. Amongst the stand-out pieces are Justin Lawrence Daugherty’s “A Thing Built to Fly is Not a Promise,” a wonderful meditation on life, death and war. Daugherty imagines Earhart alive and siren-like, searching for signs of rescue. The story surprises and delights and gives the Earhart legend a new and quirky look.

Also of note is Amir Adam’s “The Physics of Satellites,” which is another meditation on time and space, through the lens of the narrator’s Aunt Maria, who, after finding her husband “hanging like cured chorizo from the ceiling fan” takes to her bed citing arms and legs that don’t work anymore. Adam’s tight narrative structure and display of a family in crisis is remarkable.

Toh EnJoe’s microfiction (translated by David Boyd), “A Thousand and One Tongues,” is as powerful as if it were ten times as long. In a nutshell, EnJoe captures worlds and their revolutions. There’s a level of infusion to the tales of Scheherazade in Enjoe’s microfiction that gives it a distinctly original taste.

Paul Beckman’s “Healing Time” encapsulates the fissures that exist between families and how those problems that prevent openness and dialogue between siblings can ultimately backfire on the participants. The poignancy of a mother trying to heal her family’s rifts posthumously is brilliantly captured in this piece from Beckman’s book, Peek. 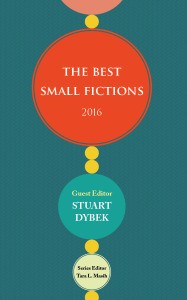 The secrets of a Days Inn and the impending birth of a child are the stuff of Amelia Gray’s “These are the Fables,” a well-crafted piece set in a Dunkin’ Donuts in Beaumont. Gray excels at describing the underbelly of life, and the denizens of small town America. Her ability to craft layered characters in such a tight narrative space is quite something.

One of the weaknesses of the collection is perhaps the reliance on the already anthologized work of Etgar Keret and Alberto Chimal. Both stories are already present in Norton’s recent, Flash Fiction International: Very Short Stories from Around the World. Keret’s ‘The Story, Victorious I & II,” is humorous, and metafictional and Chimal’s piece, “The Waterfall,” plays with baptismal rites; they seem oddly out of place here, and their inclusion weakens the anthology’s overall impact.

Also, oddly discordant, are the two spotlight interviews at the end of the anthology. These seem extraneous to the vision of the anthology and don’t serve to enhance the collection in any meaningful manner. Nonetheless, the excellent work represented in The Best Small Fictions 2016 shines a light on the best writers of short fiction today. The table of contents reads like a who’s who of flash fiction and rightly so. These stories entertain, inform, and ultimately educate the reader in what effective and insightful flash fiction should look like. Tara Masih, the series editor, and Stuart Dybek, the guest editor, have collated a marvelous anthology that builds on the series’ first iteration, guest edited by Robert.

About the Author: Paul Beckman